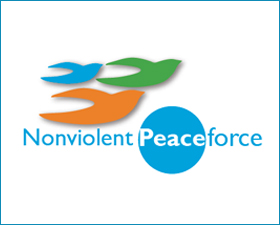 As an unarmed, paid civilian protection force, Nonviolent Peaceforce fosters dialogue among parties in conflict and provides a protective presence for threatened civilians.

With the headquarters in Ferney Voltaire (France) and an office in Minneapolis, NP field teams are presently deployed in the Philippines, in South Sudan, Myanmar and the Middle East. Our field staff include veterans of conflict zones, experienced peacekeepers, and those new to the field with the right combination of experience, skills, aptitude and attitude. Nonviolent Peaceforce (NP) is registered in the US as a 501(c)(3) non-profit organization and in France.

Within every combat zone they enter, and throughout our work worldwide, they want to achieve four overarching goals:

They protect civilians in violent conflicts through unarmed strategies. They build peace side by side with local communities. They advocate for the wider adoption of these approaches to safeguard human lives and dignity.

They envision a worldwide culture of peace in which conflicts within and between communities and countries are managed through nonviolent means.

They most often respond to invitations by credible local organizations committed to nonviolent solutions. Once invited, they meet key players, including commanders from opposing sides, local police, religious, business, and civil society leaders. They live and work in communities within conflict zones alongside local people.

When violence erupts, civilians under threat often contact us. They know and trust us. They have been living among them. Visibly nonpartisan and unarmed, they arrive in NP uniforms, with NP vehicles, letting their presence be known.

They build the confidence and safety of civilians deeply affected by conflict so they can access available structures and mechanisms for addressing problems and grievances.

Their activities have ranged from entering active conflict zones to remove civilians in the crossfire to providing opposing factions a safe space to negotiate. Other activities include serving as a communication link between warring factions, securing safe temporary housing for civilians displaced by war, providing violence prevention measures during elections and negotiating the return of kidnapped family members.

David Hartsough had long been committed to creating a better world through nonviolent means. The Quaker activist protested racial segregation in lunch counter sit-ins in the 1960s, demonstrated against the Vietnam War and nuclear proliferation, and trained civilians in Kosovo in nonviolent strategies during the 1990s.

Mel Duncan’s vision began when he went to Nicaragua with the coffee/cotton brigades during the Contra war in 1984 and saw that villages were not attacked when foreigners were present.

David and Mel met at the 1999 Hague Appeal for Peace, each seeking support to make his vision an organized entity. After hearing David’s presentation, Mel shared his ideas with him. David and Mel immediately saw the powerful symbiosis. By the end of the event, they, along with others who caught the vision, were organizing to lay the foundation for Nonviolent Peaceforce.

As they and others began organizing NP, they talked to people around the world. Amid the fiercest violence, they met courageous and creative peacemakers who told them time and again that isolation was lethal and international accompaniers extended their lives and amplified their work.

Nonviolent peacekeeping is a common vision that has flowed through Gandhi, Maude Roydon, Badshah Khan and so many others. It has occurred and recurred to enough people for generations that now many focus their lives and resources on making it real.