Home > Other > Do children’s toys influence their career choices? 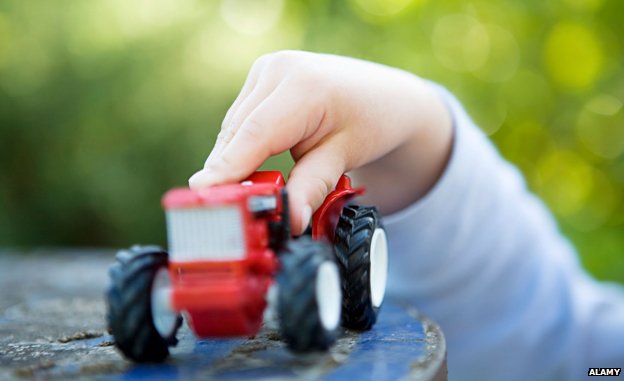 A government minister says gender-specific toys harm girls’ career opportunities. But how much do the toys children play with shape their future prospects in the job market?

Everyone has memories of toys they loved playing with as a child.

It might be building blocks or a train set, a doll house or a tea set.

It doesn’t necessarily mean those that played with them grew up to be construction workers or train drivers, housekeepers or tea ladies.

However education minister Elizabeth Truss recently warned children’s toys could affect their careers. She said gender-specific toys risked turning girls off science and maths and urged parents to buy their daughters Lego to get them interested in engineering.

Women have made great strides in the UK workforce over the past few decades, but there are still overwhelming gender divides in some professions. Just over 80% of “science, research, engineering and technology professionals” are male, according to ONS figures.

By contrast, 82% of workers in “caring, leisure and other services”, and 78% of administrative and secretarial workers are female.

Feminists and campaign group Let Toys Be Toys have been canvassing UK retailers to “organise toys by genre not gender”, saying sexist stereotyping limits children’s interests. As a result, some retail giants such as Marks and Spencer, and London toy store Hamleys, have scrapped “girls” and “boys” labels. 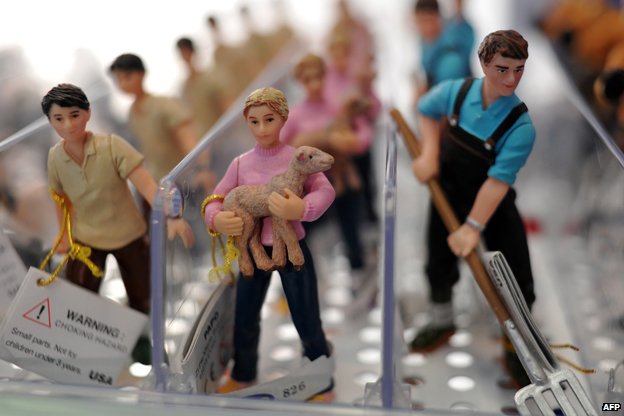 But not everyone is in collusion. A study looking at the play of young primates suggests children may be predisposed to certain play preferences.

So do the toys children play with impact their career choice?

How to make gender-neutral games 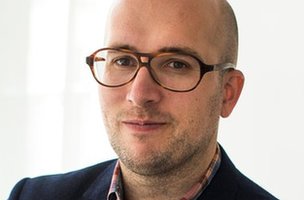 “We know toys have an impact on children, and society to a certain degree, so there’s a responsibility that comes with that,” says Bjorn Jeffery, CEO of app developer Toca Boca.

Swedish-born Jeffery has been influenced by his native country’s attitude towards gender.

“We made a conscious decision to be gender-neutral when naming our apps and in the gender balance of characters. It’s for parents and kids to decide what to use.

“We’re not constrained by the same rules that govern toys in a toy shop. An app store can circumvent the usual gender stereotypes as there is infinite shelf space and we don’t have to convince a buyer to stock us.”

Becky Francis, professor of education at Roehampton University, believes so.

“Different types of toys give different messages about what’s appropriate for boys and girls to do, and have different educational content – both elements are important and might have a bearing on schooling and career choices later,” she says.

A small study she conducted found boys tended to be given toys that involved action, construction and machinery, while girls were steered towards dolls and perceived “feminine” interests, such as hairdressing.

The message seemed to be boys should be making things and problem solving, and girls should be caring and nurturing, she says.

Also, stereotypical “boys toys” tend to be more educational, she argues. “Boys toys tend to contain didactic information, with technical instructions and fitting things together with Lego and Meccano, whereas girls’ toys tend to be around imaginative and creative play, which develop different skills,” she says.

Research by retail group Argos found that over 60% of adults working in design-led jobs, such as architects and designers, enjoyed playing with building blocks as children. Even more – 66% – working in maths related roles, such as accountants and bankers, preferred puzzles. 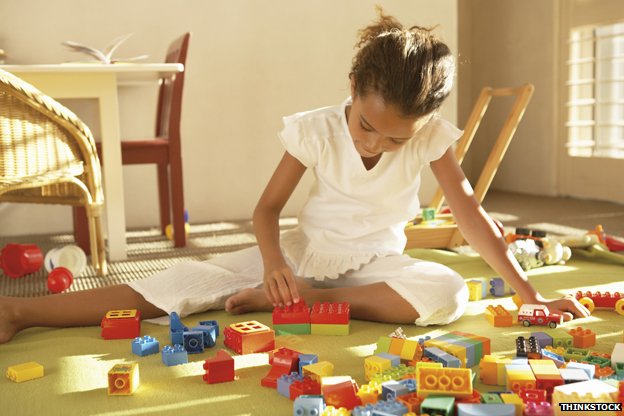 One person who seems to conform to the stereotype is ex-Commando and dad of three, Neil Sinclair. He says his favourite toy was Action Man.

“My brother – who also went into the Army – and I spent hours and hours playing with them. We’d set it up in the garden, using camouflage and strategies, deciding who was going to win depending on tactics,” he says.

But the 43-year-old says he can’t remember ever wanting to do anything other than be a soldier, setting his sights on the job from the age of four.

I’d take a storage container full of toys – construction tools, musical instruments, everything – and let them decide what to play with”

“That was way before mum and dad got me Action Man, so it’s chicken and egg. At the end of the day Action Man are dolls anyway – it’s just one might have a crew cut and a scar, another blonde hair,” he muses.

However, Sinclair isn’t a typical commando. When he left the Army, he trained as a teacher, before deciding to switch careers and become a full-time childminder. He says playing an important role in children’s learning and development is very rewarding, and the crucial thing with toys, is to give children choice.

“I’d take a storage container full of toys – construction tools, musical instruments, everything – and let them decide what to play with. Every child is different, and can be different on different days too,” he says.

It’s a philosophy shared by space scientist Maggie Aderin-Pocock. She says her father didn’t segregate toys, and she loved Lego and trains.

“Some kids are inclined that way – it’s not divided into boys and girls,” she says. But the scientist didn’t get such freedom at school. When she told a teacher she wanted to be an astronaut, it was suggested she try nursing.

While it frustrates her the “more fun toys” are labelled for boys, and even non-gender specific products like cooking sets tend to be advertised with boys wearing chef hats and girls in a pinafore, the mother of one believes the issue goes beyond toys.

“It’s society views, it’s everywhere. It’s important there are role models – we need to see female scientists on TV, on EastEnders,” she says. 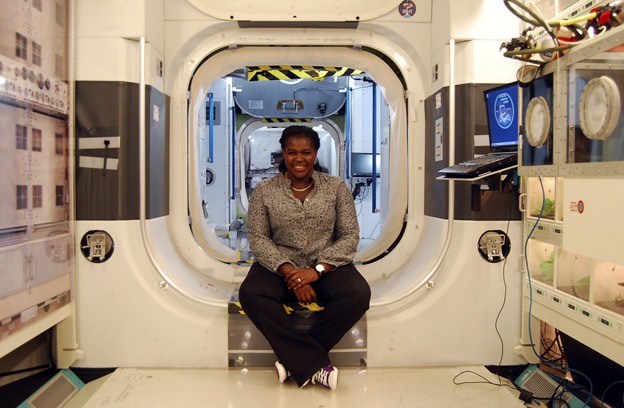 Child and family psychologist Margaret McAllister agrees there are more significant influences on a child’s career choice than toys.

“It’s a rather superficial approach and all too easy to say encourage girls to play with cars and lorries, and they are more likely to become engineers – there is no real evidence of this.

“It’s also far too limiting and channelling of a child’s experience – job prospects are a long way off from early play,” she says.

McAllister believes encouraging children to explore, question, interact with others and work together has more impact.

“Rounded people with good soft skills perform best. Plus kids have access to toys in other settings than the home, like nurseries, so you can’t really monitor what your child plays with,” she says.

More from the Magazine 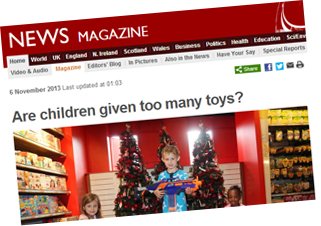 Retailers are starting to gear up to sell the latest generation of Christmas toys, writes Joanne Furniss in November 2013. But some campaigners are advocating a change in attitude. Do some Western children have too many toys?

Wholesome, demure, Sindy was the fashion doll created as a British girl-next-door alternative to the rather more glamorous and sexy American Barbie. But time has not been kind, says David Sillito.

Play and child development psychologist Dr Amanda Gummer says the key is to make sure children have access to a “healthy play diet”.

“The role of play is to introduce as wide a range of experiences as possible. The problem is parents often go for the easy option because of time constraints, but they should look for things a toy might develop like fine motor skills, which can help handwriting control. And there’s an element of breaking down stigmas too – a lot of parents won’t let a boy have a doll.

“Shops also need to stick their heads above the parapet and make a stand, they don’t need to get rid of all pink or all blue, just have more options in the middle,” she says.

When it comes to careers, Gummer believes toys can play a part in boosting belief.

“Nobody plays with Lego and learns how to build houses, but they might learn how to overlap bricks to create a stable structure. It’s more about confidence and familiarity than an actual skill set,” she says.

It is a view echoed by research from Washington and Lee University, in the US, which suggests dressing stereotypical girls toys – such as Barbie – in uniforms for stereotypically male fields – such as a firefighter or an astronaut – can influence whether girls view themselves as capable of working in those industries.

Sinclair thinks the most important thing is for parents to remain open-minded.

“One boy I used to look after as a childminder used to like dressing up as a ballerina. He was great at sport, he had good football skills. And he also liked Lego. He could turn out to be a PE teacher, a ballerina or an engineer – who knows?” he says.